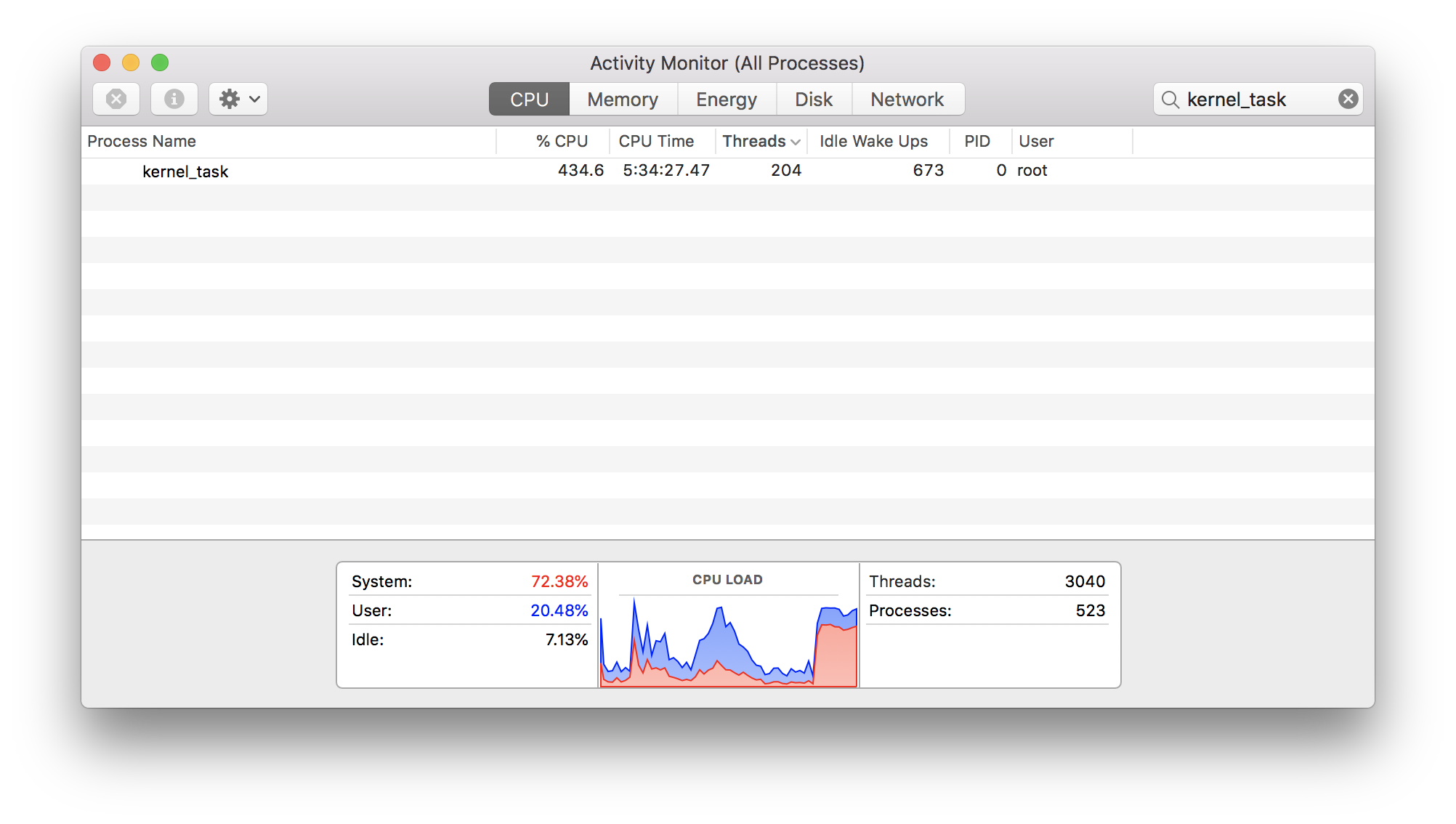 The Problem
A MacOS process called “kernel_task” uses an insanely high amount of your CPU and your system freezes up. This happens apparently at random.

This isn’t really a total solution. Apple needs to sort its operating system out. But at least this works as a kind of fix or workaround. It stops the malfunction in its tracks so that the system can at least recovery rapidly back to normal use. It stops the CPU usage peaking and locking up your system!

More on the Nightmare
For a few months, up to 3 times a day, I was experiencing a freezing of my system whereby an unknown task or process was hogging CPU usage. During these events, the system would all but totally freeze out and only work in slow motion. Sometimes restarting the computer would help; other times it wouldn’t help. The high CPU usage and the resultant system slowdown and freeze would actually last for anything from 5 minutes to 30 minutes. This was a total nightmare as it could happen at any time and be extremely disruptive to my workflow.

Known Solutions Didn’t Work
I obviously did the normal online research and tried as many known solutions as I could. There are many solutions online for how to fix this well-known ‘kernel_task’ issue, but none worked for me. Over the months, in total, I spent days trying to diagnose what was causing the problem.

What Didn’t Work
I tried all of these and more: 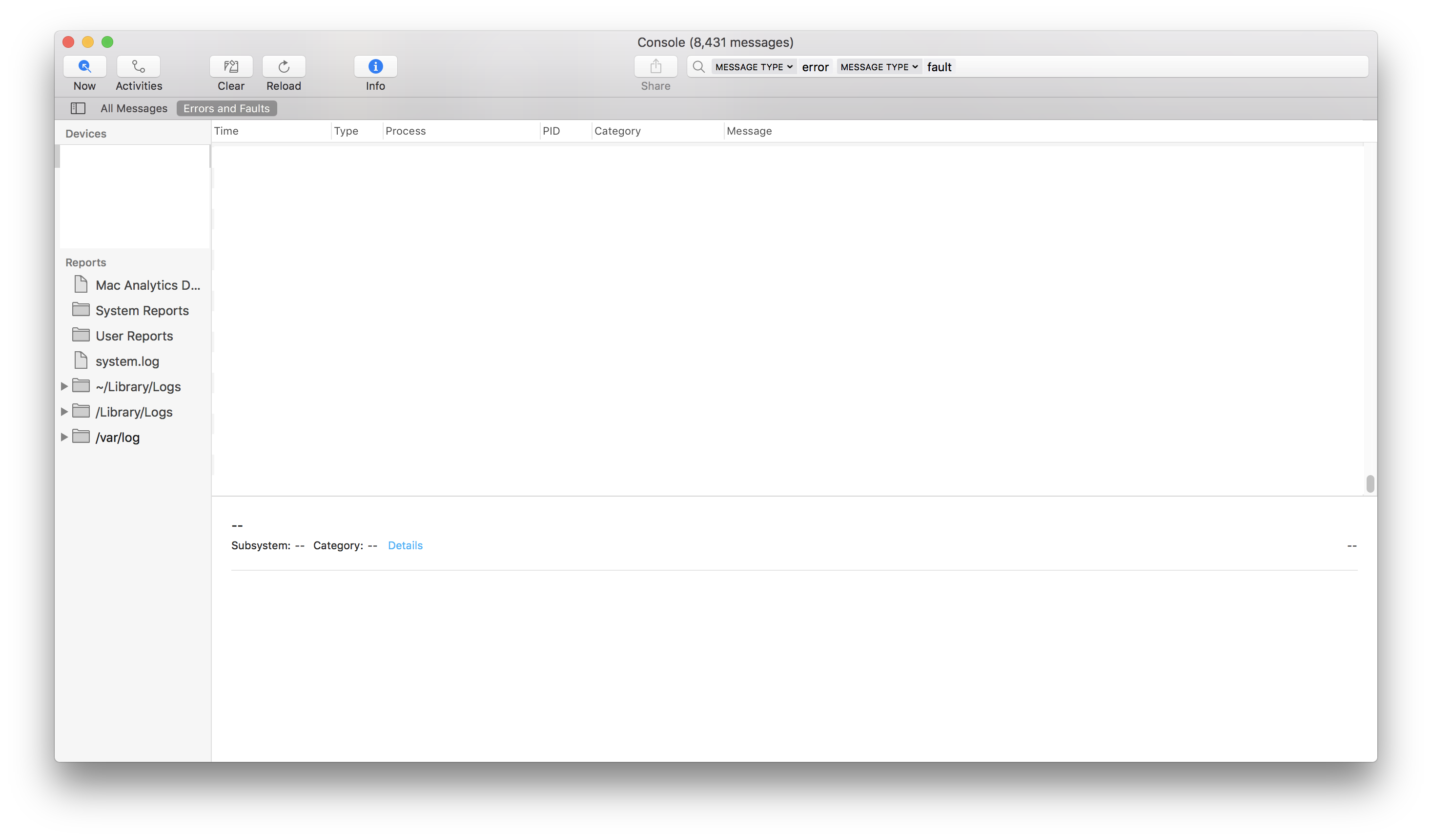 Discovery
So I had spent months trying to diagnose. Once I’d done the PRAM and SMC resets, saw that the problem persisted with WiFi and Bluetooth turned off, even in Safe Made, I started to give up trying to diagnose the problem. But by this point in the saga I was still keeping Activity Log and Console open all the time for monitoring.

One day when the system was frozen up, while I working in a cafe, someone knocked my power supply from the wall socket. I saw that the loss of power to the MacBook Pro actually stopped the kernel panic and the system rapidly unfroze.

At that time were no relatable errors in the Console, and nothing was really changing dramatically in Activity Log. I had eye on the CPU usage in those very moments and I was able to see the ‘coincidence’ between the power being disconnected and the CPU usage returning to normal.

It’s ironic that it was some kind of human error that helped me diagnose a way to ‘fix’ the nightmare issue.

Power?
I don’t know if it’s the same on your Mac, but on mine when the computer is running on battery power and is about to die, while it is preparing for hibernation a similar CPU issue occurs. When remaining battery power approaches 1-2%, the system prepares for hibernation and it starts freezing up and my apps become pretty unusable. I think it’s some kind of ‘RAM writing to disk’ that sees the slowdown. This slowdown is the same kind of slowdown that happens with the kernel_task nightmare. For me, this is more evidence of how, on my system at least, there is a relationship between the system freezing up and power and charging related conditions.

Update
It’s been a few months now of using this ‘Disconnect Power’ hack to fix the CPU usage spiral, and it’s been effective 100% of the time. I hope this might help you too.

Update 2 (July 2019)
Vladimir Knobel of Switzerland tells me that he has the same problem with his MacBook Pro and that an Apple Store diagnostics found the error was a hardware fault with “a defective DC input voltage sensor”. They told him that he’d have to replace his motherboard (Logicboard). This is useful information as it suggests strongly that Apple can diagnose this issue as a hardware issue, not a software issue. The same week as Vladimir reached out to me with this information, I had a Logicboard and I/O (input-output) board replacement. This will allow me to see thus whether the problem is now solved after the hardware replacement.

Update 3 (August 2019)
This whole thing must be, indeed, a hardware issue, as the Logicboard and I/O board replacements have fixed my issue on another identical software and hardware setup. Very disappointing for MacBook Pro owners.